Quality of life through quality of movement

I thought some of you might be interested to know how the 7-Oaks Triathlon went last Sunday.

After signing up for the race a few suffered injuries which prevented some from participating on Sunday, notably Madeleine, who had done a lot of training; and was probably the best prepared out of all of us; particularly on her swim which I’m sure would have see her achieve a great split time. It was a real shame she wasn’t able to attend; and those of us who were “lucky” enough to be there did comment and sympathise with those who had to withdraw.

12 years ago, I completed this same race in my first year in triathlon; my memory of the event had faded somewhat; and whilst I remembered the odd hill or two, on Sunday it seemed that we where either going up hill (a lot) or down hill (a little), but nowhere was it flat. Then add a bit of rain and it was truly a challenging event, longer than your average sprint distance triathlon, and approaching Olympic distances on the bike and on the run. Although it was wet the rain came and went and we finally got some welcome sunshine on the run. Thankfully there wasn’t the wind that we had seen on the Saturday, so conditions could have been worse. Katie, competing in her first ever triathlon, had an early start being one of the first off at 6.30am. This meant being at the event to register at 6am, Rob (also doing his first triathlon) and I, started together later around 08.30.

We warmed up with a pool swim of 16 lengths (400m) then a short run took us outside the sports centre (which was refreshing) to the transition area in the car park, having previously laid out our kit it was a quick (as possible) switch to bike gear, shoes, helmet, and jacket; run to the bike mount area, and then away from the sports centre for a pleasant rolling 15 miles (27km) bike ride through some extremely picturesque countryside. On return to the transition area we racked our bikes, discarded our helmets etc, and slipped on our running shoes for a Sunday jog around KnollPark, 5 miles (8km) of splendid parkland, home to wild deer who didn’t seem phased by 400 odd runners invading their home. Rob really showed his strength on the run with an impressive split of 40.33.  A ridiculously steep run down to the park from the transition area meant we had to look forward to an equally ridiculously steep climb back to the finish line, but it was worth it. Crossing the finish makes all the effort worthwhile, we received finishers’ medals and had our pictures taken, not looking our best but happy to have crossed the line, the time didn’t matter, we knew we had tried our best, and had succeeded!

Overall we had a great day despite the damp start, both Katie and Rob got personal bests for their first triathlon, and we all had a great experience, we must thank the friendly members of 7 Oaks Tri club who organised and marshalled the event on the day and did their best to make the race such a success, and to the crowd and other race competitors’ who supported everyone along the way. 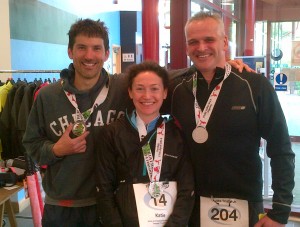 You can see full race results by clicking this link or by looking up 7-oaks triathlon.
http://dbmax.racetecresults.com/results.aspx?CId=16421&RId=2039 7Oaks Finish

If you fancy giving triathlon a go yourself then let me know, we plan to sign up to more events throughout the season, and the more the merrier!